What is Swiss Chard?

What is chard? What is swiss chard? Chard and swiss chard are actually the same vegetable. Swiss chard is just the common name for chard in the U.S.

Swiss chard is a highly nutritious leafy green vegetable. The swiss chard plant is characterized by dark green, crinkly leaves and celery-like stalks that come in a variety of colors. Swiss chard is closely related to beets, however it is grown for its edible leaves and stalk rather than its roots, like beets.

Swiss Chard is known for its brightly colored stems which come in a range of colors including white, pink, purple, yellow and red. The most common varieties of swiss chard include bright lights, bright yellow, fordhook giant, lucullus, rhubarb chard, rhubarb red chard, and ruby. When these different varieties are bunched and sold together it is referred to as rainbow chard, or rainbow swiss chard because of the different colored stems of each variety. 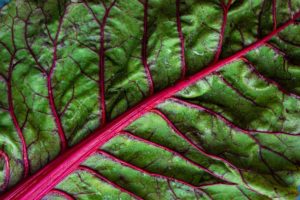 All these chard varieties can be confusing and difficult to keep straight. The two main things to remember about chard varieties are: 1. Rainbow swiss chard is not its own variety of chard. Rather it is the term used for a bundle of differently colored chard varieties. 2. Rhubarb and chard are two different plants, even though there are varieties of swiss chard called rhubarb chard and rhubarb red chard. In fact, these two plants aren’t even related. The reason for the names rhubarb chard and rhubarb red chard simply comes from their resemblance to rhubarb.

Swiss Chard has tender leaves and a slightly bitter taste. Swiss chard taste tends to be more mild when eaten raw. The taste of swiss chard leaves is often compared to spinach. When it comes to cooking chard leaves they are comparable to spinach in that manner as well.

So what do you do with swiss chard anyway? To answer the question how do you eat swiss chard first you must determine how to cook swiss chard. Cooking varies depending on what part of the swiss chard plant you are using.

If you prefer you can eat swiss chard leaves raw. Raw leaves are a common addition to pre-packaged salads and can also add a big nutritional boost to smoothies. Another fun way to eat raw chard leaves is by using them as a healthy substitute to a tortilla for wraps and tacos. Some people even make their own pesto out of chard!

If using chard raw just remember to first wash. All leafy greens, fruits and vegetables should always be washed (especially if you plan on eating them raw) prior to eating unless they come in a package labeled “triple-washed,” “washed” or “ready-to-eat”. 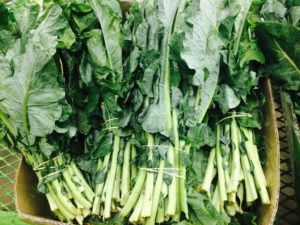 The stalks of swiss chard are also edible. They tend to be tough, so they require longer cooking time than chard leaves in order to break down the cellulose and make them softer. Chard stalks have a slightly more sweet taste compared to the leaves. Chard stalks are often compared to celery because of their crunchy texture and slightly sweet nature.

When preparing chard stalks you can treat it as celery as well. Cut stalks near the base and pull away any large fibrous strings. Chard stalks can be grilled, sautéed, roasted or even pickled. Since cooking time varies between chard leaves and stalks it is best to cook them separately.

Baby chard is exactly what it sounds like. It is simply chard that has not fully matured. Baby chard tends to be more mild and less bitter than mature chard. Baby chard is very similar to spinach in looks, taste, and texture. Baby chard is most commonly used as an addition to pre-packed salad kits.

What is chard called in Australia?

Chard or swiss chard has many names. In Australia it is known as silverbeet. Other names for chard include green chard, spinach beet, leaf beet, sea kale, swiss beet, sea kale beet, and Indian spinach. Despite the many names it goes by, all of these are the same vegetable.

Is Chard good for your health?

Like other dark leafy greens, swiss chard benefits the body in many ways. The main benefits of swiss chard nutrition come from its vitamin and mineral content, particularly vitamin K, vitamin A and vitamin C.

Vitamin K makes proteins that help the body perform normal blood clotting. It also improves calcium absorption and can even help reduce the amount of calcium that leaves the body in the form of urine. This makes swiss chard excellent for improving and maintaining bone health.

Swiss chard is also a good source of vitamins A and C, which means it provides at least 10 percent of the recommended daily value.

Vitamin A is found in plant foods as beta carotene and converted into active vitamin A in the body. Vitamin A helps decrease the risk of heart disease and some types of cancer. Vitamin A is also critical for eye health and can help prevent night blindness and lower the risk of developing cataracts and age-related macular degeneration, which is the leading cause of blindness in the U.S. 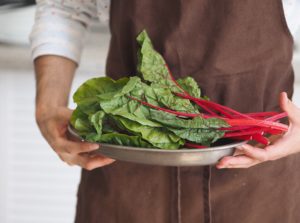 Vitamin C works as an antioxidant in the body to protect body cells from damage caused by free radicals. This in turn helps reduce the risk of developing cancer and heart disease. It is also important in producing collagen in the body, a protein required for wound healing. Vitamin C also promotes a healthy immune system and increases absorption of iron from plant-based foods.

Swiss chard also provides the body with the nutrients magnesium, lutein and zeaxanthin.

Magnesium aids in maintaining normal muscle and nerve function. It also helps maintain healthy blood sugar levels, immune system, blood pressure, bones and heart. Lutein and zeaxanthin work together to reduce the risk of macular degeneration and other age-related eye diseases, which can lead to blindness. Lutein also plays a role in brain health and function throughout life.

Additionally research suggests that leafy greens, such as swiss chard, may help brain function as well. A 2018 study found that just one serving of leafy green vegetables per day can help slow cognitive decline. Even more impressive, the study found that those who consumed the most greens had the cognitive health of someone 11 years younger when compared to those who consumed the least.

For most individuals it is perfectly healthy to eat chard and other dark leafy greens everyday. However, individuals who are on blood thinning medications should be careful not to increase their consumption of chard and other leafy greens suddenly. This is because chard contains an extremely high amount of vitamin K.  Vitamin K can reverse the effects of anticoagulant drugs if it is suddenly increased in the body. That does not mean these individuals should not eat foods high in vitamin K, it just means they should be consistent about how much chard (and other dark leafy greens) they consume, due to the high concentration of vitamin K it contains.